At Machine Applications Corporation, our deep domain knowledge has given us the opportunity to work on numerous applications and challenges pertaining to humidity/ moisture monitor and measurement. In the course of our dealings with enterprises looking for moisture analyzers to supplement their moisture control measures, we have interacted with several individuals.

Based on these interactions, we have come to realize that not everyone possesses a clear understanding of moisture and—as a consequence—of moisture control too. As a leading manufacturer of moisture monitor equipment, we consider it our responsibility to familiarize existing and potential users of our moisture monitor equipment with the basics of humidity/moisture. This, in turn, will prove to be beneficial in implementing effective moisture control in their respective industrial sectors.

In colloquial conversation, people often use words such as humidity, moisture, vapor, dew point, steam, fog, condensation, interchangeably. Though these words are part of everyday speech, people have an extremely ambiguous understanding of the meaning and significance of each of these terms.

On the contrary, when a scientist or engineer uses these terms, they are chosen carefully and used in a specific context. Thus, there is every possibility that a layperson might misinterpret words that are used in a purely scientific context.

For instance, consider these sentences: “The water is boiling. I can see steam coming emerging from the pot.”To a layperson, there might be nothing wrong with these sentences. But a person who works with steam would instantly pinpoint the inaccuracy. Steam is invisible. The cloud that is seen above the pot of boiling water is, in fact, water droplets that form as the steam cools and condenses on mixing with the ambient air surrounding the pot.

There is no single method or unit to represent the moisture/humidity mixed with the air (a moisture monitor is typically used to determine moisture content). Relative humidity, specific humidity, humidity ratio, dew point, percent by volume, and grams per cubic meter are all used to express a measure of the amount of water vapor that is mixed with other gases.

Relative humidity/moisture is familiar to most of us and very important term for moisture control because of its everyday usage with regard to the weather. Relative humidity is usually abbreviated “RH” and is expressed as a percentage between zero and 100%. RH indicates the amount of moisture monitored in the air as a percentage of the maximum amount that can be mixed with the air at a specific temperature ans pressure (below 212°F). The maximum amount of water vapor in the atmosphere occurs when the partial pressure of the water vapor is equal to the vapor pressure of water at that temperature. This is the 100% RH point. The following graph shows the maximum percentage of water vapor that can be in the air at a given temperature. 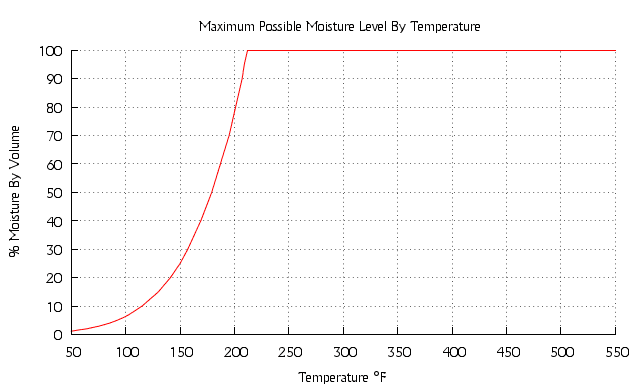 The graph shows that the higher the temperature (up to 212°F) the higher the amount of water vapor that can be mixed with the air. At 212°F and above it is possible for the air to be totally water vapor (steam) and the % moisture by volume can reach 100%.

Before we give the technical definition of RH we must explain the terms that will be used in the definition.

Let’s take an empty jar and screw the lid on tight. The air in the jar is the same air that is in the room outside of the jar. To make things simple assume that the air is 20% oxygen and 80% nitrogen.

The partial pressure of a gas is the part of the total pressure that is exerted by that gas alone.

Figure 2 shows the saturation pressure for water vs. temperature from 50°F to 550°F. 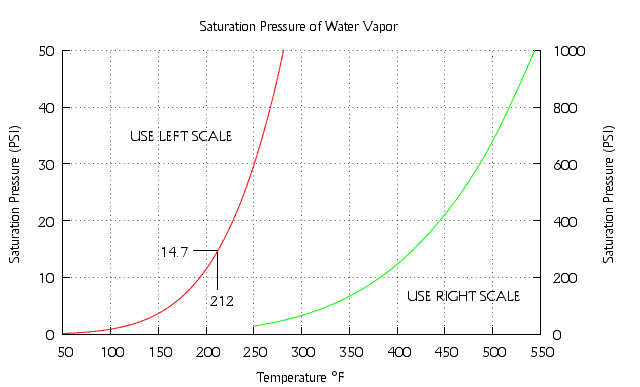 Pw is the partial pressure of water vapor in the air and Ps is the saturation pressure. Above 212°F Pw is equal to the atmospheric pressure when the moisture level is 100%, but Ps, the saturation pressure, increases rapidly with temperature. The graph in Figure 3 shows the maximum RH vs. temperature. Note that below 212°F it is possible to achieve 100% RH even though the % moisture in the air by volume is less than 100% (as shown on the graph in Figure 1). Above 212°F the maximum RH is less than 100% even when the atmosphere is 100% water vapor (100% moisture by volume).

At 400°F the maximum possible RH is 5.9%. At 700°F the maximum possible RH is .48%. Although there are instruments available to measure RH up to 400°F, it can be seen from the graphs of Figure 1 and Figure 3 that the relative humidity is a 7 useless and even misleading scale for indicating moisture control level above 212°F. An instrument that could measure relative humidity with an ±1% accuracy at 400°F would give us a measure of the % moisture by volume to an accuracy of ±1 part in 5.9 or ±17%.

With this example we begin to get an idea of the difference between a relative moisture scale and an absolute moisture scale. The relative humidity changes when the temperature changes, but the % water vapor by volume does not change with temperature. It changes only when water vapor is added or removed from the atmosphere.

The atmosphere around us is composed of a mixture of gases in the following proportions when the air is totally dry:

At the high temperatures inside a boiler the relative humidity would be close to zero even though the % moisture by volume would be 18%.

The previous examples have shown that % moisture by volume is an absolute scale and does not change with temperature. There are other absolute scales as well:

The % Moisture by Volume can be defined in a least two ways:

In some countries a popular moisture monitor scale is grams of water vapor per cubic meter. This scale is based on the density of water vapor at standard conditions of temperature and pressure (STP). There are several different STP values that are given by various standards organizations. In this publication we will use the STP of the International Union of Pure and Applied Chemistry (IUPAC). The STP of the IUPAC is 0°C and 100kPa.

Pure water vapor (100% H2O by volume) can not exist at STP because 0.6% water vapor by volume has a dew point of 0°C at this pressure. Except for water vapor, all the constituents of air can exist as a gas at STP. We will use this fact in order to calculate a theoretical value for g/m3 of water vapor.

Note that the % moisture by volume scale is totally independent of the molecular weights of the other gases in the mixture, as in a boiler or direct fired oven.

The factor .622 is for normal air only. It must be corrected if the average molecular weight of the gases is different than air.

As we have shown in previous examples, when air below 212°F is cooled the relative humidity increases. The dew point is the temperature at which the relative moisture/humidity reaches 100%. The RH can not exceed 100%, so if we continue to cool air it will give up moisture in the form of condensation.

The boiling points of the major components of air at atmospheric pressure are:

The point of this discussion is that there is nothing special about the way water vapor behaves compared to other gases in the atmosphere except that the dew point and frost point of water vapor occur at ordinary ambient temperatures.

Figure 4 gives the dew/frost point temperatures for low concentrations of moisture in the air.

Figure 5 gives the dew point temperature for medium and high concentrations of moisture in the air.

The dew point can be determined from the % moisture by volume by using a graph of the saturation pressure (Ps) of water vapor (as in Figure 2) or a table of Ps vs. temperature.

Example:
If the % moisture by volume is 25%, what is the dew point temperature? First find the partial pressure of water vapor (Pw).

Dew point is not quite an absolute scale. Dew point does change with pressure, and atmospheric pressure changes with altitude. The atmospheric pressure in Denver, Colorado is only 12.2 PSI (5200 ft. above sea level). At sea level water boils @ 211.9°F. In Denver water boils a 203°F. These two temperatures are dew point temperatures corresponding to 100% moisture by volume, but they are different due to change in total pressure.

Values for five different moisture scales are tabulated in Table 1 –
Moisture/Humidity Scales (found on pages 14 thru 19). This table can be used to< convert from one moisture scale to another.

Table 1 can be used to convert to or from relative humidity (RH) at temperatures below 212°F.

Each moisture scale that we have discussed is preferred by people that work in specific disciplines.

This scale is the most intuitive of the absolute scales. People who work in the areas of combustion and pollution control engineering routinely measure flue gas constituents in % moisture by volume. Because of the linear nature of this scale it is easy to display and easy to regulate moisture control using normal set point P.I.D. controllers. For these reasons %MV is also used in the areas of food processing, product drying and product humidifying.

This scale is preferred by people who work in the product drying process since it can be directly used in energy calculations. This scale is also commonly used as the vertical axis on most psychometric charts. Because this scale is very non linear and goes thru many orders of magnitude, it is a difficult scale to display or use in a control mode. Since it is simple to convert between scales, %MV is used for display and control of the moisture level, and then converted to humidity ratio for calculations.

This scale is widely used by people who are concerned with the possibility of water condensing in pipes carrying compressed air or other gases. Dew point is also used by those working with sampling systems for the same reason. Condensation in lines can be avoided by maintaining the working fluid at a temperature well above its dew point or by drying a fluid to a dew point well below the lowest temperature to which it will be exposed.

Learn More about Moisture Control with our Moisture Handbook